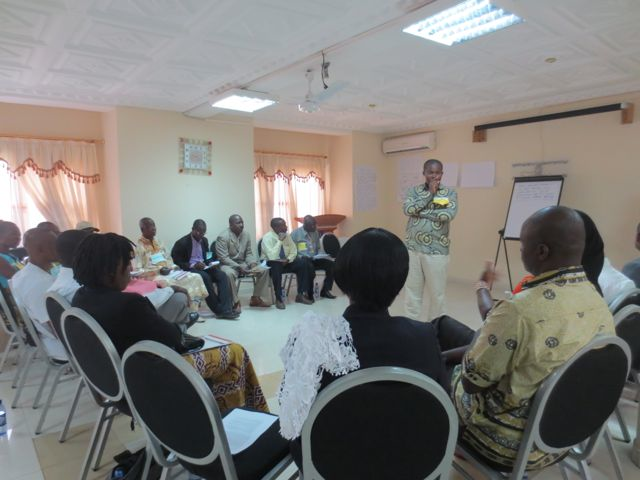 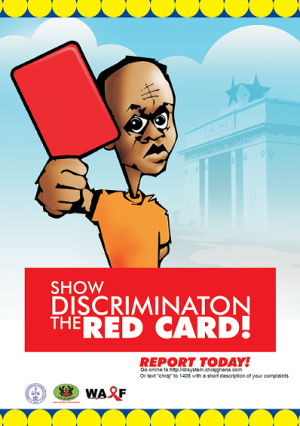 The stigmatisation and discrimination of persons living with HIV (PLHIV) and key populations (KPs) including men who have sex with men (MSM) and female sex workers (FSW) remains a major human rights challenge in Ghana. Though there are institutions and structures for every person in Ghana to access justice and seek redress, PLHIVs and KPs are very often unable to access justice. This stems from the fact that there is generally little or no trust in state institutions established to protect the human rights of all persons living in Ghana. The question is, for how long must these vulnerable continue to suffer in silence? Should PLHIV continue to be denied employment because of their status? Should MSM be unlawfully detained and even tortured whilst in detention? SFSW be raped by law enforcement officers because of their status?

In response to these human rights abuses perpetrated against PLHIVs and KPs in Ghana, the Commission on Human Rights and Administrative Justice (CHRAJ) adopted the Discrimination Reporting (DR) System as a unique innovation to provide opportunities to these groups of the citizenry who are often vulnerable to make complaints using this platform. Article 218 of the 1992 Constitution of Ghana mandates the CHRAJ to investigate complaints of violations of fundamental human rights whether they occur in the public sector or private sector. To better address the human rights needs of these vulnerable people and facilitate access to justice, the CHRAJ, in collaboration with the Ghana AIDS Commission (GAC), made a landmark stride by launching the DR System on the World AIDS Day in 2013 to further strengthen its human rights protective mandate to every Ghanaian citizen. 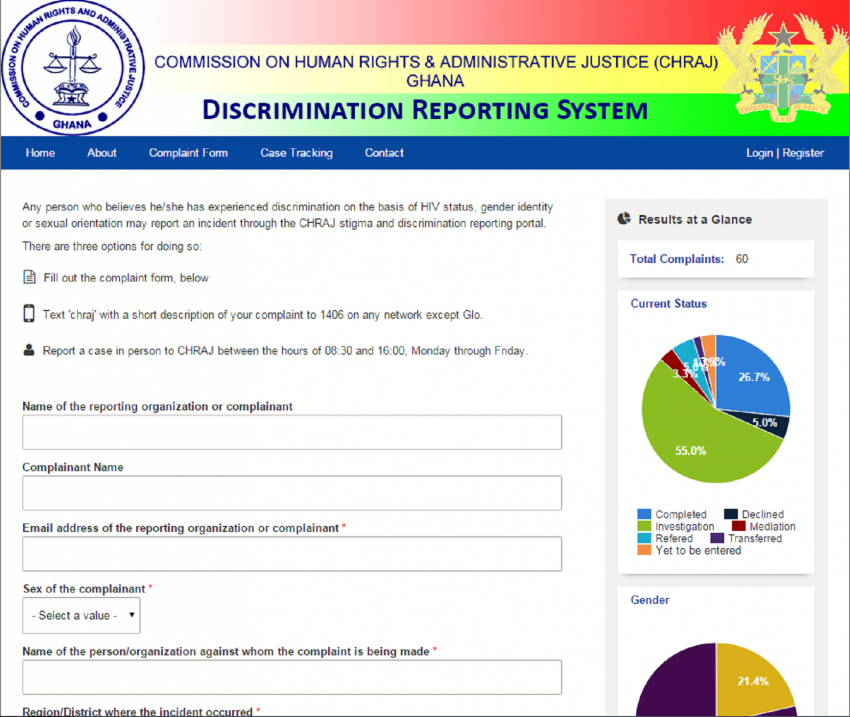 The implementation of the DR System uses both an Online Reporting System and an SMS module. The system is designed to facilitate the reporting and tracking of cases online and also allows for text messages to be sent to the CHRAJ.

At the inception of the DR System implementation, the users, in particular PLHIV and KPs, including Civil Society Organisations (CSOs), expressed concern about the disclosure, privacy and confidentiality of the DR System because they were not clear about how cases would be handled. This genuine fear was expressed on the basis of the high level breaches of confidentiality and disclosures by some service providers they tend to seek help from. For instance, one PLHIV narrated how a nurse at the clinic informed her sister-in-law about her HIV status even before she had the opportunity to inform her husband. She said:

the day my HIV Status became known to the nurse at the clinic was the day my marriage collapsed. She called no other person than my sister-in-law to inform her about my status. Before I could get home to inform my husband, the news of my HIV status was all over. My in-laws threw my things out of my marital home that very day. How will I know that by reporting on this system my information will be in the public domain?

To ensure the effectiveness and quality delivery of service, the CHRAJ set up a specialised desk called the HEALTH RIGHTS DESK. This desk is manned by a national health rights task team and is mandated to receive complaints of stigmatisation, discrimination and other human rights violations, and to investigate them in a private and confidential manner. Because of the sensitive nature of cases reported to the desk, the Commission trained national facilitators to deliver further training programmes to all staff, the target groups, service providers, Civil Society Organisations (CSOs) and other stakeholders.

The CHRAJ also embarked on an institutional capacity development programme. As part of the programme, 105 of CHRAJ Directors and over 30 Front-Line Staff including receptionists, secretaries, drivers and security officers were trained on stigmatisation and non-discriminatory practices. The training for the front line staff is crucial because they are the first point of contact at the CHRAJ. Some of the statements by these “Frontiers” were as follows:

A year after the implementation of the system, cases trickled in slowly and only 22 cases had been reported. The CHRAJ identified the cause to be an information gap on human rights issues. The CHRAJ quickly worked with CSOs to bridge the gap by developing a training guide on Stigma and Discrimination. Additionally, specific materials (brochures and fliers) were developed to make the system more visible. Further training programmes were delivered to about 460 PLHIVs, KPs and Service Providers in 7 Regions of Ghana, namely; Greater Accra, Eastern, Western, Ashanti, Central , Brong- Ahafo And Volta Region. These training programmes centred on relevant human rights issues and how to report cases using the DR system. The essence of this approach was to generate demand for cases. After these training programmes the number of cases reported rose from 22 to 44 in a month.

A nurse who benefited from the training remarked that

since I know the couple I thought it was my duty to inform the wife about the husband’s HIV status so that he does not infect the wife in case she is not positive. Now I know that my duty is to counsel the husband and encourage him to disclose his status to the wife.

it will be a breach of confidentiality if I disclose any one’s status without that person’s consent and the victim can bring an action against me.

As of November 30, 2015, about 57 cases have been reported to the CHRAJ using the DR system: 13 self-logins, 32 by CSOs who reported on behalf of PLHIV and KPs, 10 direct login and 2 through the SMS module. (See below for percentage distribution)

This comprises 26 PLHIV, 24 LGBT and 7 FSW cases. Out of the 57 cases, about 16 have been successfully resolved, 2 cases were referred, 3 were declined and the rest are under investigation. (see below for the case statistics) 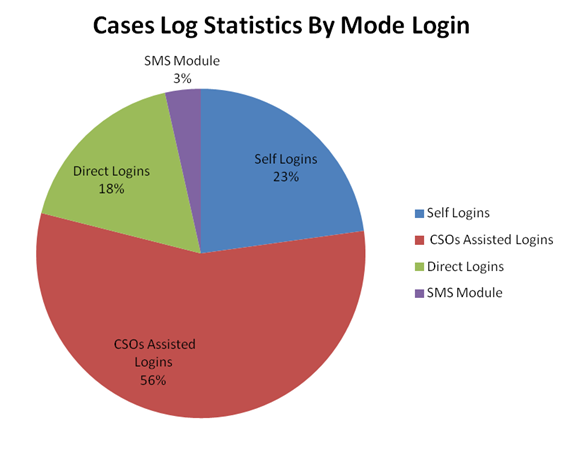 A Case of Community Stigmatisation Against a MSM

A MSM reported to the CHRAJ through the DR System that he was being stigmatised by the locals in his community. According to him they called him names, cast innuendos and mocked him because he dressed like a female. The CHRAJ picked up the case. Since it was difficult to hold an entire community to account on such a matter, the Complainant was asked to identify a ring leader for the CHRAJ. The Complainant identified the ring leader championing the behaviour of stigmatisation within the community. Subsequently the CHRAJ invited the ring leader for a discussion. The ring leader admitted the allegations raised by the Complainant and indicated that his behaviour was as a result of ignorance. He made a promise to the CHRAJ that he would champion the fight against discrimination within his community.

After a couple of months the CHRAJ enquired about the status of the Complainant’s relationship with the members of his community. The Complainant indicated that the relationship was now cordial and that the acts of stigmatisation such as name calling have all ceased. He was pleased with the services the CHRAJ provided and the case was closed as settled.

A PLHIV complained through the DR System about her treatment when she visited a health facility and her pre-labour medical examination revealed that she was HIV positive. The Complainant alleged that the medical officers who attended to her disclosed her status to her brother-in-law who was a member of staff at the hospital. The Complainant added that before she had got home, her brother-in-law had disclosed her status to the public. Her husband had already been made aware and her marriage was at the verge of being broken.

The CHRAJ commenced an investigation into the matter and invited the manager of the hospital in for a discussion. However the Complainant returned after the first meeting to withdraw the case because she and her husband had settled the matter with their family and she stated that her marriage was stronger than before. The Complainant further informed the CHRAJ that the hospital had apologised to her and had promised to sanction the officers involved.

The CHRAJ has gained the confidence and respect from the CSOs working in similar fields and as a result has been invited to participate in all their review meetings.

Through the implementation of this innovative System, the CHRAJ has placed itself in a strategic position to advance the rights of the PLHIVs and KPs in Ghana. No more suffering in silence: they have been empowered to SHOW-DISCRIMINATION-THE-RED-CARD.