The role of the new Centre is to ‘promote effective approaches to prevent, mitigate, and remedy human rights impacts associated with sport’. 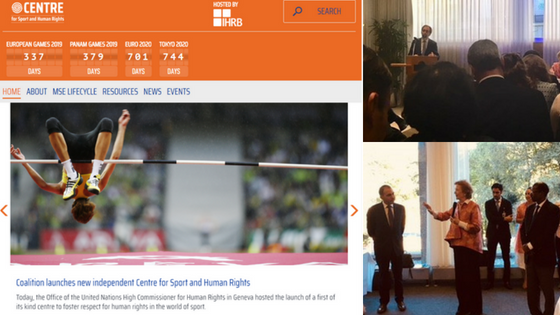 Its establishment represents years of work by a diverse coalition of members of the Centre’s Advisory Council, who are committed to the fulfilment of the Sporting Chance Principles. The Advisory Council brings together NGOs, business leaders, sporting bodies, governments and National Human Rights Institutions to agree the priorities of the Centre’s work to address human rights abuses in sport and embed the principles of human rights in the sporting event lifecycle.

The Centre is hosted by the Institute of Human Rights in Business until it become fully independent in 2021. It is chaired by Mary Robinson, former President of Ireland and former UN High Commissioner for Human Rights, who highlighted in her opening remarks the Centre’s aims to:

UN High Commissioner for Human Rights Zeid Ra’ad Al Hussein was joined by International Labour Organisation (ILO) Director-General Guy Ryder, in highlighting sport as an effective platform for advocating for human rights because of its capacity to inspire and unite, while promoting values of fair play and respect. The establishment of the Centre has been widely praised as a positive step forward for human rights in an increasingly challenging rights-based environment.

National Human Rights Institutions (NHRIs) from Northern Ireland, Australia, and New Zealand have been actively involved in raising awareness and driving the agenda of human rights in sport, and in the work of the Centre and MSE platform. This strategic partnership spurred the creation of the Declaration of Sport and Human Rights, which was unanimously adopted by members of the Commonwealth Forum of National Human Rights Institutions. It is hoped that with upcoming events such as the 2019 Pacific Games, African Games, Africa Cup of Nations and 2022 Commonwealth Games, that more NHRIs will engage with the Centre and with sport to advance the protection and promotion of human rights.

The Centre and the Mega-Sporting Events Platform have already produced a number of resources and guidance documents that National Human Rights Institutions may find useful, and which cover a number of topics such as child rights, peace and stability, risk mitigation, and corruption. It is also seeking members from National Human Rights Institutions to become involved with the Advisory Council and specific working groups.

Expressions of interest in joining the Advisory Council can be made to Holly Thacker: commonwealthforum@equalityhumanrights.com

Find out more about the Centre and access available resources: www.sporthumanrights.org