Following a seminar hosted by CFNHRI on how National Human Rights Institutions can use UPR to advance minority rights, Tracey Mikaele from NHRI Samoa shared their approach to Sexual Orientation and Gender Identity (SOGI) rights.

NHRI Samoa was established in the already existing Office of the Ombudsman (Office) under the Ombudsman Act 2013 and awarded ‘A’ status in 2016.

Since 2016, the Office has been working alongside our SOGI communities to progress their rights to health and education, access to justice and more, and bridge the gap between these communities and Government. NHRI Samoa currently has a SOGI representative in the Office’s Human Rights Advisory Council where they assist with internal capacity building and sensitization activities and provide expert advice to the Office on priority issues concerning SOGI communities in Samoa.

In 2017, the Asia Pacific Forum (APF) in partnership with the United Nations Development Programme Bahrain (UNDP BRH), delivered a blended course and sub-regional workshop in Samoa. It aimed to enhance the knowledge and cooperation between National Human Rights Institutions (NHRI) and Civil Society Organisations (CSO) in the Asia Pacific region to promote and protect the human rights concerning lesbian, gay, bisexual, transgender and intersex people in their countries.

NHRI Samoa and the Samoa Fa’afafine Association Incorporated (SFA) participated in the workshop, the outcome of which was a national action plan (NAP). Developed by NHRI Samoa and SFA, the Human Rights Focus area of the NAP was, “Advancing Human Rights of the Fa’afafine / Fa’afatama Communities (SOGIESC/LGBTI) in Samoa.”

The NAP contained different activities for NHRI Samoa and SFA to carry out under 2 overarching goals:

Goal 1: To strengthen the Rights to Health of Fa’afafine & Fa’afatama communities as an important component of Samoa’s response to its UPR Recommendations and Implementation.

To achieve the goals of the NAP we developed and implemented the following strategies: 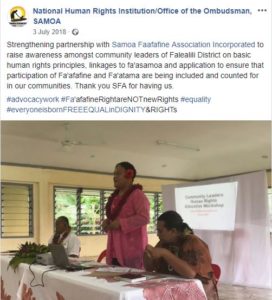 The NAP was carried out from February – November 2018. Overall, the Project was a success as it not only achieved the intended outcomes but also further strengthened the working partnership between NHRI Samoa and SFA.

The participants included the four SOGIESC communities in Samoa i.e. Fa’afafine, Fa’afatama, MSM and Intersex (which were the targeted groups), and there was good representation from these groups. They were joined by representatives from government and non-government organisations who both work in various ways to protect and promote rights of SOGIESC groups in Samoa. 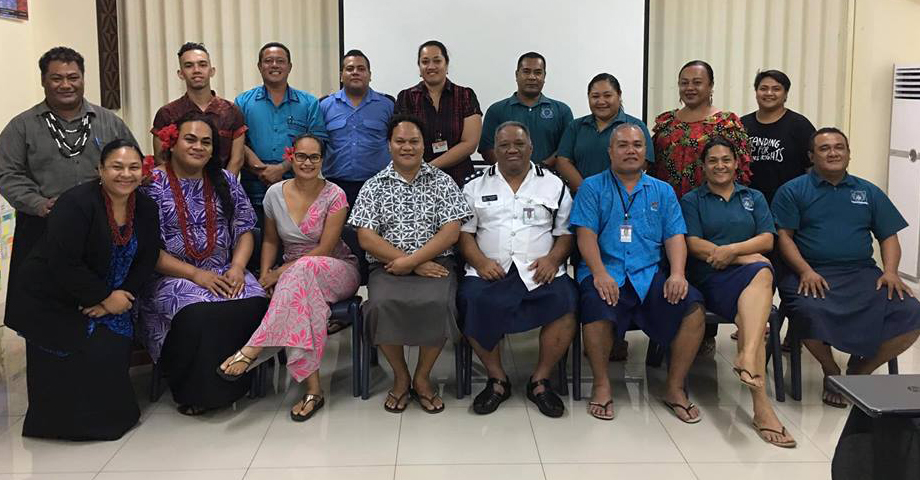 Upon the completion of the project, NHRI Samoa and SFA decided that Activity 5 (Law Enforcement Guidance and Standards) required further consideration. As a result, NHRI Samoa and SFA produced a roadmap for law enforcement agencies i.e. Police and Prison Service. The roadmap included activities that would contribute to the development of “Guidelines and Standards” to be considered and adopted by law enforcement agencies when dealing with SOGIESC persons. A second phase (phase 2) of the roadmap would include awareness workshops about SOGIESC and the human rights standards that law enforcement officers need to consider when dealing with the public. Phase 2 is planned for April – November 2019.

The Asia Pacific Forum and UNDP financially supported this project of work, with the former contributing to the next Phase 2.

Fa’afafine – is commonly translated; literally as “ in a manner of a woman”. Fa’afafine are human beings who are biologically male by sex and biologically feminine by expression and characteristics.

Fa’afatama – is commonly translated; literally as “in a manner of a man”. Fa’afatama are human beings who are biologically female by sex and biologically masculine by expression and characteristics.

Fa’afatama and Fa’afafine are also both considered cultural identities unique to Samoa.