Removing barriers for trans and non-binary people in Canada 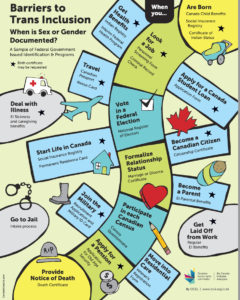 The Canadian Human Rights Commission (CHRC) has been working with partners in Government and civil society to protect transgender, non-binary and two-spirit* Canadians from discrimination.

The Canadian Human Rights Act was amended to expressly protect people in Canada from discrimination on the grounds of gender identity or expression in 2017. Both before and after the Act being amended, the CHRC consulted with communities to better understand the issues facing trans, non-binary and two-spirit Canadians, particularly when they interacted with public bodies or accessed public services.

They also carried out research which examined federal government departments to understand the instances in a person’s life when the Canadian government may request information about their sex or gender, or when it may require a citizen to produce identification including sex or gender markers. This led to the production of a ‘lifecycle roadmap’ (pictured) illustrating many of  the times during a person’s life when they may have had their sex or gender documented or when their birth certificate was requested.

This easy-to-use illustration has been used to inform conversations with stakeholders and Government departments. Since the legal change, the Canadian Government has made changes to implement more inclusive policies and practices, including the  modernisation of sex and gender information practices. This includes providing options for individuals to self-identify gender, giving the option of a third or ‘X’ gender marker, and not recording information on sex or gender unless there is a clear rationale for this information to be collected.

*Two-spirit refers to a person who identifies as having both a masculine and a feminine spirit, and is used by some Indigenous people to describe their sexual, gender and/or spiritual identity.

Canada must uphold the rights of persons experiencing homelessness