In 2014 the African Commission on Human and Peoples’ Rights (African Commission) adopted Resolution 275, titled, ‘Resolution on Protection against Violence and other Human Rights Violations against Persons on the basis of their real or imputed Sexual Orientation or Gender Identity.’

Resolution 275 expresses grave concern about increasing violence and other human rights violations, including murder, rape, assault, in respect of persons based on their real or perceived sexual orientation or gender identity. It calls upon states to take action for stopping such violence, to ensure that human rights defenders working on the human rights of sexual minorities are free from reprisals and take appropriate measures to ensure adequate remedies are ensured to victims of such violence.

The Centre for Human Rights at the University of Pretoria, and African Men for Sexual Health and Rights [AMSHeR] have produced guidelines are designed to help state and non-state actors in Africa curb violence against persons who identify as lesbian, gay, bisexual or transgender. 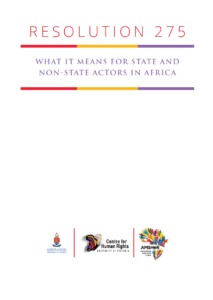